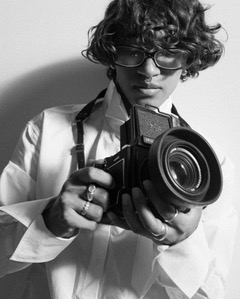 Born 1993 in Jeddah, Saudi Arabia where she lived most of her childhood, then moved to Riyadh where she’s based currently. In 2009 she decided to learn fashion photography on her own when she bought her first “point and shoot” digital camera.
Hayat’s vision started taking shape in 2014 when she focused on diversity as a subject using Film Photography as her way of documentation for its raw perspective. She was selected by the Ministry of Culture as one of the Speakers in the first Fashion platform “Fashion Futures, 2019” in Saudi Arabia. Hayat worked with Major publications such as Vogue, Vogue Arabia, GQ Middle East, and did the first Farfetch Middle East Campaign. She’s also featured in WWD, Harper’s Bazaar Arabia, Grazia Middle East and Vogue Arabia.
Click on an image to view larger